The Advantages of Samsung Over Apple 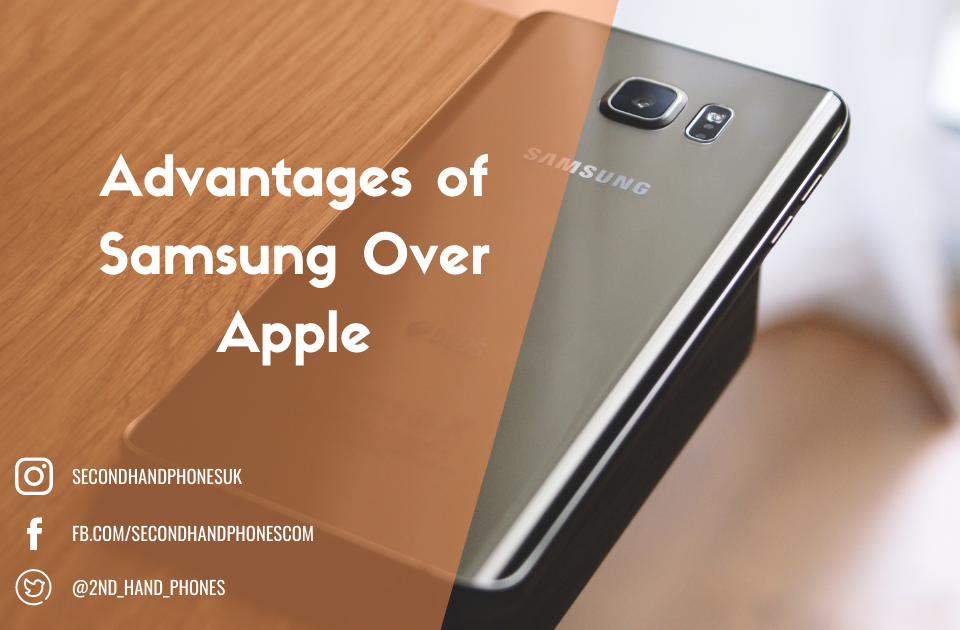 Whether you're a fan of Android or Apple, it’s undeniable that Samsung has some prominent features that make their devices a popular option when it comes to purchasing a new phone.

Just to name a few of their features, Samsung’s models are known for:

If you’re already aware of what Samsung is about and you are interested in a better value mobile, then you can check out our online store and browse through a great range of reconditioned Samsung phones.

Is Samsung the Best Android Phone?

Although there are more operating systems available, Android and Apple dominate the market. This speaks volumes about the quality they both offer their customers.

Samsung phones not only are easily compared to iPhones, but they also have to stay on top of the market and compete with other Androids. There are over a dozen Android phone manufacturers constantly developing and defining the next groundbreaking user experiences.

In the world of Androids, Samsung has always fought to come out on top. Since 2007, their Galaxy series has astonished and captivated their users.

Samsung’s consistency, affordability and their great range of products tick all the boxes that users search for in phones.

Apple Vs Samsung: A Comparison

Both brands offer a different, yet excellent, mobile experience that is reliable and widely sought after.

Some of the more important factors to compare include:

We’ll be taking a look at all of these features and reviewing the advantages of Samsung devices over iPhones.

This point is a big consideration when purchasing a phone, whether it’s for yourself, a family member or friend. Price is the first factor that comes to mind, as after all, purchasing a phone is an investment.

Although the production cost of phones will be fairly equal for both brands, generally speaking, Apple products will be more expensive than Samsung’s.

Apple is renowned for its expensive price tags. As they know their customers will pay for their luxury products, some iPhones can cost over £1,000. You tend to have to wait about three years for an iPhone to drop to half its price.

Samsung’s latest range of high-end models can be just as expensive as an iPhone because of their undeniable quality and design. This said, in only one year the price of a Samsung Galaxy will sometimes drop by as much as 35%.

The key reason for Samsung’s consistent affordability is their broad range of devices. They have a great range of high-end, middle-tier and budget smartphones so all their customer needs are met regardless of the budget they may have.

Each device fits a particular purpose for its users, this makes them accessible to everyone. Unlike Apple, who re-release the same model at their standard luxury price.

If you’re looking for a much more affordable option, then you can consider one of our refurbished phones at Second Hand Phones. Our devices are a great choice at a much more comfortable price.

iPhones have always had a distinct style, making their devices eye-catching and sought after.

Samsung has come a long way in many aspects of design, following suit with Apple as they discard the plastic and opt for a much more seamless style.

Although Samsung has kept to a similar design, they are seen as more user-friendly in terms of ports and cables.

You will often find that Samsung is much more accessible than iPhone, which will need additional adapters such as a lightning port, whereas a Samsung or Android use more universal cables.

Samsung has always raised the bar in innovative design thinking. They have been experimenting with bringing back the flip phone for while now, and have been refining this feature for their latest Fold designs.

Apple has jumped on board quite late in comparison to rethinking their design, with their own flip phones not scheduled for release until 2021.

Apple and Samsung devices have both increased their display resolution. The newest iPhones have a Super Retina XDR OLED display in comparison to Samsung’s newer models which use Dynamic AMOLED.

AMOLED displays are innovative in that they control the individual pixels, and produce an all-round better quality picture. AMOLED also has an overall better power consumption in comparison to iPhone’s OLED display.

Samsung has always been recognised for its attention to detail when the quality of its cameras is considered.

Their S10+ was a poignant talking point because of the use of three rear camera lenses, and it doesn’t just stop there! The three cameras incorporated a 16Mp ultra wide-angle lens with a 123-degree field, which is a wider field than the human eye can see.

Samsung also uses camera features that involve recognising the objects or scene in focus and tailoring the picture quality. This is used to improve the overall image and can include recognising food, animals, greenery, beaches and sunsets.

Apple also offers post-processing effects to enhance photos. They followed suit with Samsung and released their iPhone 11 with dual cameras in late 2019. However, the iPhone 11 cameras were of a lower spec compared to Samsung’s devices as they only captured in 12Mp.

If the quality of the device's camera is the main feature you find yourself looking for, and you want one that utilises the most advanced technology available, you should definitely consider a Samsung.

Storage can be an underappreciated factor when purchasing a new phone. It’s easy to get caught up in features such as camera quality and its general appearance.

Unlike iPhones, when using a Samsung you won’t have the constant issue of deleting apps, moving photos to another storage device or buying more space to extend its storage.

Many Samsung devices can still use micro-SD cards to help extend storage space. Although, you will probably find that you won’t need to as there will likely be enough capacity as is.

If you were to find that you don’t have enough space and decide that you need more, there are other options with Samsung that can easily meet your needs.

You could pair, for example, a Samsung S10 and it’s 512GB with external storage. If the external storage has the capacity of 512 GB too, you would be looking at over 1TB worth of storage, which is pretty impressive, and much more than you’ll find yourself needing.

Apple does offer a Lightning port accessory (sold separately) which you can use to transfer any data from an SD to the device. However, it’s not an ideal solution in terms of expanding the storage for general everyday use.

In terms of running the Android operating system, Samsung is the biggest smartphone manufacturer. Samsung’s Galaxy devices are almost always launched with the most current version of Android’s software.

They even overlay Android with their ‘One UI’ to optimise the use of their devices. One UI is an operating system that offers visual and functional improvements for your user experience.

iPhone, however, does benefit from using their very own operating system as they have more control over the production of their updates.

When comparing Android to iOS there is a lot to consider, as each has its pro’s and cons. In short:

Android can be a lot more user-friendly thanks to their general openness to other applications, available languages and cost.

iPhones do not allow other apps or features outside of iOS due to being a closed system, whereas Android is open and more accessible. This even follows in the design of their Google Assistant which is much more thorough and detailed.

iPhones are much stricter and particular in terms of what you can achieve and have on your device. They don’t offer close to the number of apps available on Google Play but in some cases, this is safer.

iCloud is notorious for being confusing and difficult to grasp, whereas Google Cloud has been recognised for its simplicity.

Ultimately, each brand pours it’s expertise into certain features that make them so unique. Samsung invests more in their displays, memory, processor and boxed content. Apple, meanwhile focuses its investments on its brand, UI, camera and sensors.

Each device has its pro’s and cons; it mainly comes down to the user’s perspective. What factors and features are most important to you, and what do you value the most?

Otherwise, if you’d like to have a look at our range of reconditioned Samsung phones you can check out our store. If you still can’t be swayed and have a soft spot for Apple, we also stock iPhones, too!